WPA-PSK is known to be vulnerable to offline cryptographic attacks allowing an attacker to bruteforce the cleartext passphrase from previously captured wireless frames. The attack is divided in two phases: capturing wireless frames, then bruteforcing the passphrase offline.

You will need a wireless interface in monitor mode.

If you’re using NetworkManager, ask it to stop managing the wireless interface:

A WPA handshake is an exchange of four EAPOL authentication messages between a client and an access point. You will need to capture the complete handshake in order to recover the cleartext passphrase. To perform this technique without waiting for a client to associate, the SSID you’re targeting must already have associated clients.

From the airodump-ng output, identify the mac addresses of associated clients. Then try to force them to re-authenticate by sending spoofed de-authentication frames:

When a WPA handshake has been captured, the airodump-ng output should notify you on the top-right corner.

To list the WPA handshakes contained in a dump file, use aircrack-ng without specifying a dictionary:

Got WPA handshake? Extract them from the packet dump:

A recently discovered vector allows the attacker to extract enough information to bruteforce the passphrase from the first EAPOL authentication message, which is sent to all clients intiating the authentication process with the access point. For this to work, the following conditions should apply: 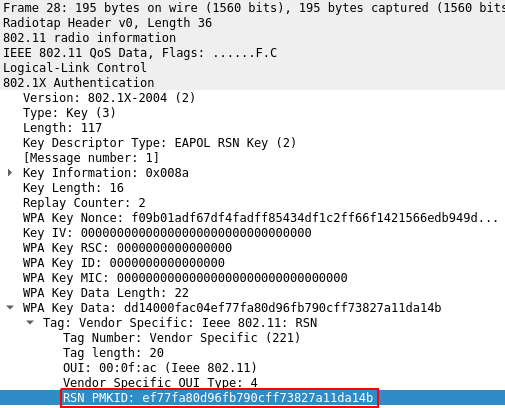 As PKC is used to provide roaming support, this technique is almost always effective on corporate Wi-Fi running on expensive Cisco access points. Even if at this time, Cisco is not aware of any Cisco product impacted by this new vector. That’s a lie…

Write all identified BSSIDs to a file in the following format:

Then, capture the PMKID by initiating the four-way handshake with the access point:

The file output of hcxdumptool is in the new pcap-ng format. Convert it back to the legacy pcap format for compatibility reasons:

When the PMKID has been captured, hcxdumptool should output FOUND PMKID and increment the powned counter.

As the PMKID is included within the first EAPOL message of the four-way handshake no matter what, you can basically retrieve it using any other packet capture tool as long as you also initiate the authentication process.

To list the PMKIDs contained in a dump file, use aircrack-ng without specifying a dictionary:

Got PMKID? Extract them from the packet dump:

Both WPA handshake and PMKID use PBKDF2 (4096 iterations), create a custom wordlist to be more effective.

If you have access to a decent GPU, use hashcat.

Crack both WPA handshake and PMKID using your CPU: